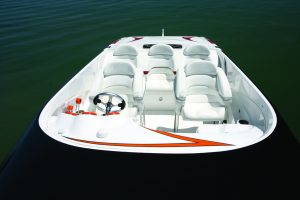 Most 42’ V-bottom offshore boats weigh in the vicinity of 10,000 pounds, so you probably wouldn’t think that building one 700 pounds lighter would make much difference. Guess again. If you can reduce the weight of a boat by 7 percent and pack in 2,150 hp, you’re pretty much guaranteed to produce a 114-mph rocketship.

That’s what we found when we checked out the new 42’ Inferno from Nordic Boats. While the first one was built with wood stringers and conventional materials, the version that I tested was laid up with foam coring. All the stringers and bulkheads are also foam-cored. Bi and tri-directional fiberglass complete the laminate recipe. The hull and deck are put together in a butt-fit joint that’s sealed with fiberglass bonding around the interior perimeter. The joint is capped with a rubber rubrail with a plastic insert. Of course, all Phillips-screw heads are fastidiously aligned. 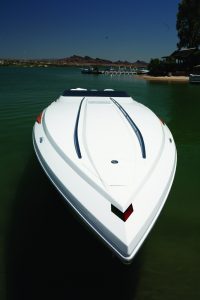 Deck hardware includes bow, amidships and stern cleats. The latter are installed vertically on each side so there won’t be any issues with dock lines chafing and marring the gelcoat. Additionally, the boat is equipped with a ski tow eye, an uncommon piece of hardware for a 42’ go-fast, except on the West Coast, where many of these boats are used to pull competitors in the famed Catalina Ski Race. Out on the bow, there’s an anchor locker to keep your grounding tackle secure as you blast through the ocean.

To get a look at the real hardware in the 42 Inferno, raise the power engine hatch, which opens on twin hydraulic rams. The twin Mercury Racing HP1075 SCis were staggered with the port motor forward. To ensure that cranked-down nuts and bolts don’t compress the foam in the stringers, Nordic uses custom horseshoe-style aluminum motor mounts that cap the bearer and extend down on each side. The bolts are then driven through the stringer and both sides of the mount and finished with a backing nut.

Nordic takes advantage of the added space on the starboard side of the compartment by putting three fender holders on the bulkhead. There’s a single one to port. Access to maintenance items including the IMCO steering reservoir, Mercury Racing fuel filters and trim pumps is excellent. You can top off the pumps easily thanks to their location on the forward bulkhead. Additionally, the dry sump tanks for the engines are on ring bulkheads, again in a great spot should you need to add some oil.

My only suggestion to improve the compartment would be a fold-down step on the forward bulkhead to make it easier to get down into the area because it’s a good drop getting down in there and to get out, most people will need to step on an exhaust header or the supercharger housing, which is not the best idea when the engines are hot after a long run.

Close the hatch and you can stretch out comfortably on the padded sunlounge on top of it. For the cockpit, Nordic went with renowned interior specialist McLeod Interiors. Three people can travel comfortable in the individual buckets that make up the back seat. The bottom cushions pull out from under the armrests to access stowage and the batteries in plastic trays. On a high-end custom boat like this one, I’d rather see anodized aluminum boxes for the batteries. There was also a cutout that lets you get to the fuel shutoffs, but the edges of the opening were rough. Nordic says this is not the norm and will smooth them on future models. Check it out for yourself. For additional stowage, there are gunwale cutouts along each side of the bench seat. They have a 1” tall fiddle and would be good for stashing fenders, lines and cleaning supplies.

Up front, steps forward of the co-pilot’s bolster make it easy for deck hands to get to the bow to tend to lines. To starboard, the helm was laid out with Livorsi Marine’s Monster Series gauges. The 4” diameter tachometers and speedometer were in clear view above the Livorsi SmartCraft screen, which was n the center of the panel. Additional gauges are grouped by engine on each side of the screen and the complement included pressure and temperature instruments for oil and water as well as volt and blower boost meters. Under the multi-function screen were gauges for fuel pressure and fuel level. Because fuel pressure is a more important function to monitor than volts, I’d switch the location of these two instruments.

Accessory switches are in the flat on each side of the tilt IMCO hydraulic helm and the Livorsi controls were to starboard with individual switches for drive and tab trim just ahead. Even though the multi-function SmartCraft screen monitors trim, I liked that Nordic included mechanical trim indicators on the 42 Inferno’s dash. After running the boat at more than 110 mph, the one glaring omission by Nordic was a fairing to send some of the onrushing wind over our heads. The manufacturer said it plans to include one on future models. When you head belowdecks on the 42 Inferno, you find one of the most usable cabins in a boat of this style and size. Take special note of the abundance of stowage capacity. The cabin hatch is a sliding power unit, which will impress techno-guys.

To starboard at the aft end, is the private head, which is fully molded and has hinges that retract to pull the hatch closed. There’s a pull-up shower and sink, but I would have preferred that Nordic not use carpet in the base of the sink cabinet because it can get wet and even indoor-outdoor rugs can mildew.

Across from the head, the galley area includes a 3’ by 1’ by 2’ ice chest, and a sink, plus a series of large lockers at eye level and in the base of the cabinet. A drawer will be ideal for stashing remotes as well as bottle openers and other similar items, but it would work better if it was opened on rollers. 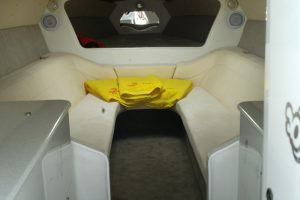 If you so choose, you can opt for the flatscreen TV that was in our test boat and given the ample lounge and sleeping area, a couple who wants to go weekending would be comfortable watching a movie on the unit mounted on the aft bulkhead. Just forward of the head area is a countertop with a second drop-in cooler, plus another series of lockers, including one that was more than 2’ deep inboard to outboard.

Facing lounges have plenty of headroom and offer space for about eight adults. Forward, the V-berth cushions exceed 6’ in length and are plenty wide for a couple to slumber in piece. Because of the boat’s natural position when at rest—the bow is higher than the stern—your head will be above your feet.

You’ll want to have your head on straight when you take the wheel of any 110-mph-plus boat and the 42 Inferno works well in a variety of conditions. With its twin-stepped bottom and running surfaces that extend aft slightly on each side, the maintains a nice level attitude when it runs and it responds well in all maneuvers.

We were out on a crowded Lake Havasu and I was coming up on a catamaran that I planned to pass. The driver of the cat never looked back—it’s amazing how few people check their surroundings—and I had to take evasive action instead of making a pass. This is when you find out how a boat truly handles and the 42 Inferno responded great. It turned well in all directions at 70 mph and ate up boat chop like it wasn’t there. After my turn at the wheel, longtime offshore racer and poker runner Rick Bowling of Gone Again fame took the wheel and came away with the same impression. We both ran it up to 108 mph at only 5800, which meant that we were 400 rpm off the top revs for the HP1075 SCis. Nordic explained that the boat was over-propped and a flick of the gps speedometer recall revealed that the boat had in fact hit 114 mph. Even with 700 fewer pounds of weight, this boat still has knockout power.