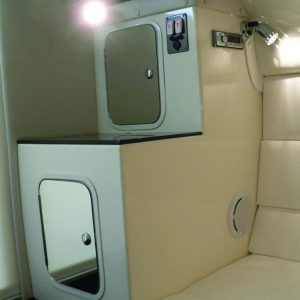 Designers look at many aspects of a boat when developing a model, but few pay attention to the flow of air to the motor more than Velocity Powerboats founder and president Steve Stepp. The Velocity 290 Super Cruiser is the perfect example. While most builders just use some air intakes cut into the decks or engine hatches and a select few might actually utilize Naca ducts that were made popular in NASCAR, they can’t compare to what Stepp has done with his boats.

The 290 SC’s two-piece engine hatch is hollow. Naca ducts in the sides of the deck feed into channels in the hatch that end directly above the flame arrestor on the Ilmor MV-10 625 engine in our test model. It’s the closest thing in performance boating to ram-air induction. The result is a naturally aspirated, single-engine boat that hit 87.4 mph at 6000 rpm with some dialing in still to be done. We were running on Lake Monroe near the Velocity factory in Sanford, Fla., and conditions were less than ideal with winds hitting between 15 and 20 mph and whipping up at least a foot of chop. The short-spaced waves presented little challenge for the 290 SC, which went through them like Joey Chestnut through a plate of Nathan’s hot dogs.

When I backed off to 5000 rpm, the 290 SC ran a comfortable 71.1 mph, which means it can run plenty fast and comfortable enough in roughed-up conditions to make it a great entry-level poker run boat. When I pulled out the stopwatch, the boat dashed from 40 mph to 60 mph in 8.2 seconds and from 50 mph to 70 mph in 9.8 seconds. Anything less than 10 seconds for either of these sprints is plenty respectable.

Even after a decade of other builders promoting the efficiency and speed of ventilated or “stepped” bottom designs, don’t be confused into thinking that Stepp’s boats are ventilated. They don’t need to be. With its 1’-wide keel pad, four strakes that run full-length, rounded chines that look like a half of a tube with a 4” diameter and a notched transom, the 290 SC matches the aerated bottoms in speed and level ride attitude.

Where it surpasses the ventilat 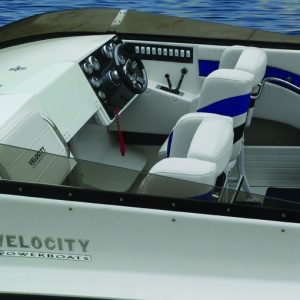 ed bottoms is in handling. Inject air beneath the running surface of any boat and the possibility for instability exists. Because the 290 SC’s bottom is not ventilated, its handling is much more predictable. I rarely ever turn a boat at speeds above 70 mph, but felt confident making a smooth arc in the 290 SC at 80 and have no doubt that you could turn this boat at wide open. When I backed off to 50 mph and even 60 mph, I made smooth slalom passes.

Another aspect of the 290 SC that will make it enjoyable for poker running is its solid construction. Velocity builds the boat without any wood with foam coring in the bottom, hullsides and deck with bi- and tri-directional fiberglass. Race-style stringers provide a strong backbone and the hull and deck are fully bonded around the interior perimeter of the boat. A black plastic rubrail protects the seam from dings at the dock.

When you take control of the 290 SC, the boat is as comfortable as it is fun. Both front bolsters have power drop-out bottoms and angled footrests. There’s also a glove box with a padded hatch in the port dash. It doesn’t drain, so don’t plan on using it as a cooler. Whether you drive from a seated or standing position, the thick Lexan windscreen does a good job of routing onrushing wind up and over your head.

To starboard, the Livorsi Marine gauges are set up in a horseshoe-shaped pattern around the non-tilting wheel. Starting at the lower left, the complement starts with the water temperature gauge. As you work up and around the wheel, it continues with the oil pressure monitor followed by the tachometer and the speedometer, which are in the center above the wheel. On the starboard side are the gauges for fuel level and volts, plus the remote control for the stero and the Faria depthsounder. A Livorsi mechanical indicator keeps you apprised of drive and tab position. It’s located just above the individual switches for the tabs, which are in an angled panel that makes it easier to operate them comfortably. White rocker-style switches with popout breakers control all accessories. 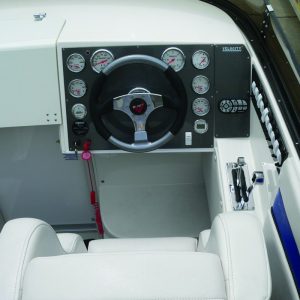 A great feature for families is the depth in the 290 SC’s cockpit. Even in the aft section there’s 3’3” of freeboard, which is great for keeping kids secure in the boat. The rear seat has been improved with three individual buckets instead of a flat bench. The corners have better contouring and give the boat a more contemporary feel. In the base of the seat, there’s stowage in a full-width locker, plus a single battery and glass barrel-style fuses protected behind a splash-resistant panel. I’d rather see Velocity use plastic-encased spade-style fuses, but I’ll give credit for them being protected. It’s also smart that Velocity puts one of the on board batteries beneath the seat so that you can still open the engine hatch if there’s a problem. For additional stowage, there are side gunwale trays that are bulkheaded fore and aft and have tall retainers to create good capacity.

Abaft, that hatch has three headrests built into the forward end. The cushion is flat and about 2” thick. With the hatch raised, I could see that the Ilmor V-10 was installed on aluminum L-angles through-bolted to the stringers. Velocity utilizes removable inspection panels that let you check on the backing bolts for the L-angles. Because the V-10 is longer than a V-8, Velocity put relief in the compartment bulkhead that lets mechanics still get a hand in front of the pulleys when work needs to be done. The engines are outfitted with Custom Marine headers. Optima batteries are in anodized boxes and all the trim pumps are easily accessed for topping off fluid.

When I closed the hatch, I could see that the 290 SC has a molded swim platform with a shower and freshwater fill to starboard and the boarding ladder to port with a grab handle above. The fold-up cleats are installed horizontally on the transom in a position that makes them perfect for cross-tying without fear of the docklines marring the gelcoat. Beneath the platform, the boat was equipped with Dana Marine 1000 series trim tabs and non-muffled exhaust tips. Spring cleats adjacent to the bolsters on each side and a single bow cleat provide good options for tying off. 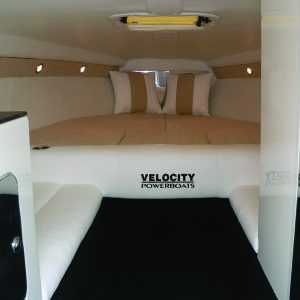 Once you’re tied up for the night at a transient slip or anchored in a quiet cove, you’ll enjoy the 290 SC’s spacious cabin. There’s a galley to port with a Corian countertop and good stowage capacity in a pair of lockers. To starboard, the head has excellent seated headroom, as well as a pull-up shower. I liked that the hatch was double-latched, but would have preferred some ventilation slits to let out steam and let in fresh air.

Facing lounges, a two-person to port and a single to starboard have plenty of clearance overhead for adults and stowage in the base. Forward, the V-berth had 8” above my shoulders when I laid on my side and was 6’ long with plenty of space for two people to sleep side-by-side. In the base is stowage for the cabin table and for the filler cushions that convert the lounges to a second berth. Overhead, the deck hatch lets in plenty of air when you’re sleeping. Even in the cabin, the 290 SC is a breath of fresh air.