In a summer filled with canceled events, the Lake of the Ozarks Shootout continued to shine for charity.

It was early summer and Lake of the Ozarks Shootout organizer Ron Duggan was about to cancel the event because of the pandemic.

With many of the Shootout’s 800 volunteers falling into the high-risk category and watching boating events get canceled from coast to coast, Duggan figured they would try again in 2021. 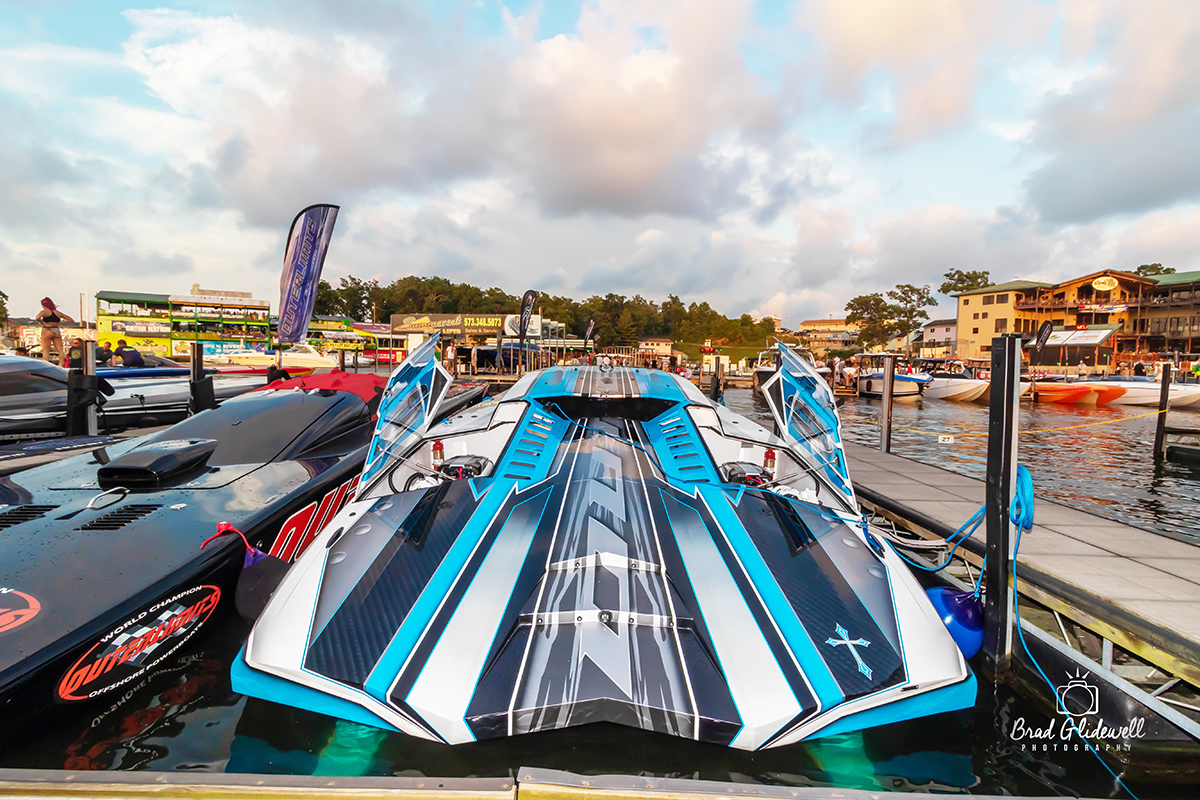 That was until Duggan received a call from Missouri Gov. Mike Parson not to cancel the Lake of the Ozarks in August. Duggan also received an upwelling of support from an unlikely source—his older volunteers, who were willing to put in the work despite the pandemic-related health risks.

Duggan was glad he stuck with it as the 32nd running of the Shootout was one of the biggest in the event’s history, raising a record $400,000 for local charities.

“I was on the eve of canceling this thing and I called (our volunteers) and talked to them,” said Duggan, who got an earful from his volunteers. “They said it was too important not only to the communities and charities but it’s too important to entire country right now. By the time I got off the 30-minute conversation with them, I was like, ‘we’re going forward.’”

Armed with masks, hand sanitizer and 300 fewer volunteers, the group staged the week-long event that drew thousands of boaters to Lake of the Ozarks in late August. The Shootout brought some normalcy out-of-state visitors whose states have closed gyms, bars and restaurants to curtail the Covid-19 pandemic.

While the world was turned on its head, some things never change at the Lake of the Ozarks Shootout. American Ethanol, which had won the last five Top Gun trophies, was once again the fastest boat at the Shootout with a 202-mph pass on the 3/4-mile course. 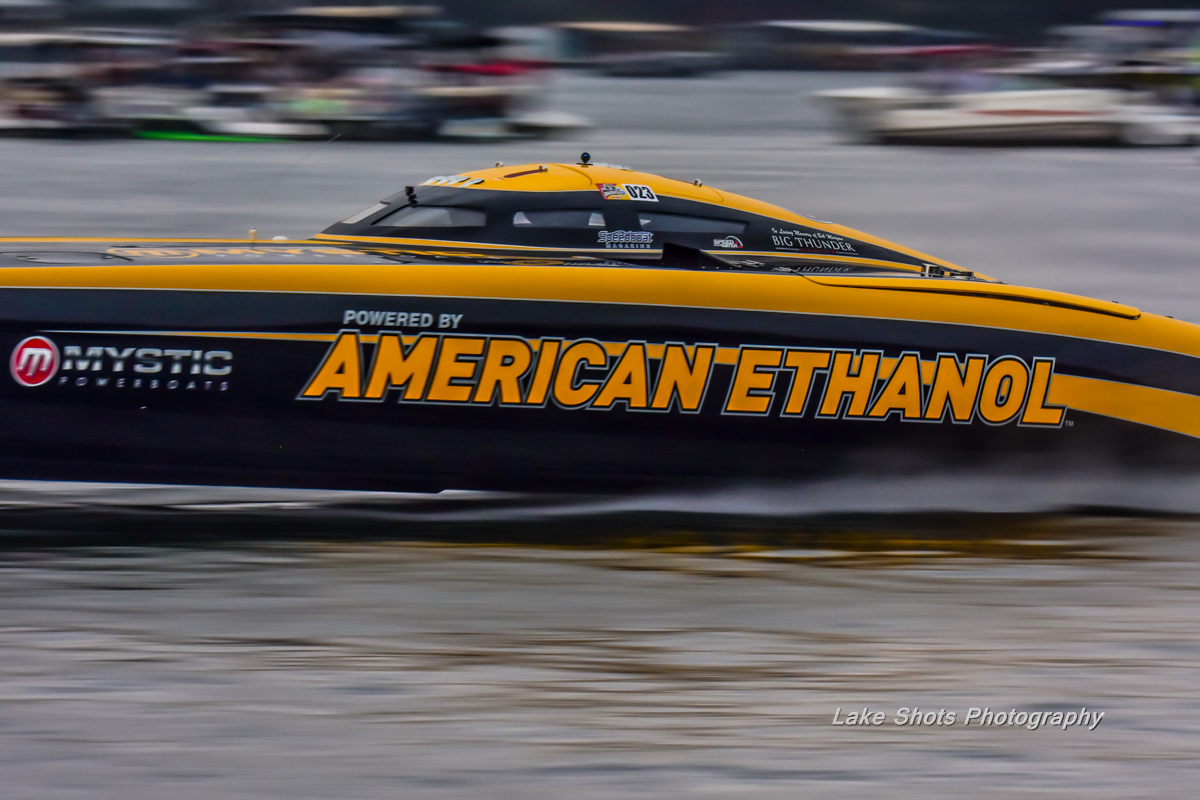 The Mystic catamaran, owned by Don Onken, was throttled by John Cosker and driven by Tony Battiato. The duo did two passes (second one clocked at 201 mph) as it was obvious no powerboats would be able to match their speeds for the Top Gun title.

Cosker has collected 10 Top Gun trophies over the years, starting in 2003 when he first competed with Dave Callan before the event moved to Captain Ron’s Bar & Grill. 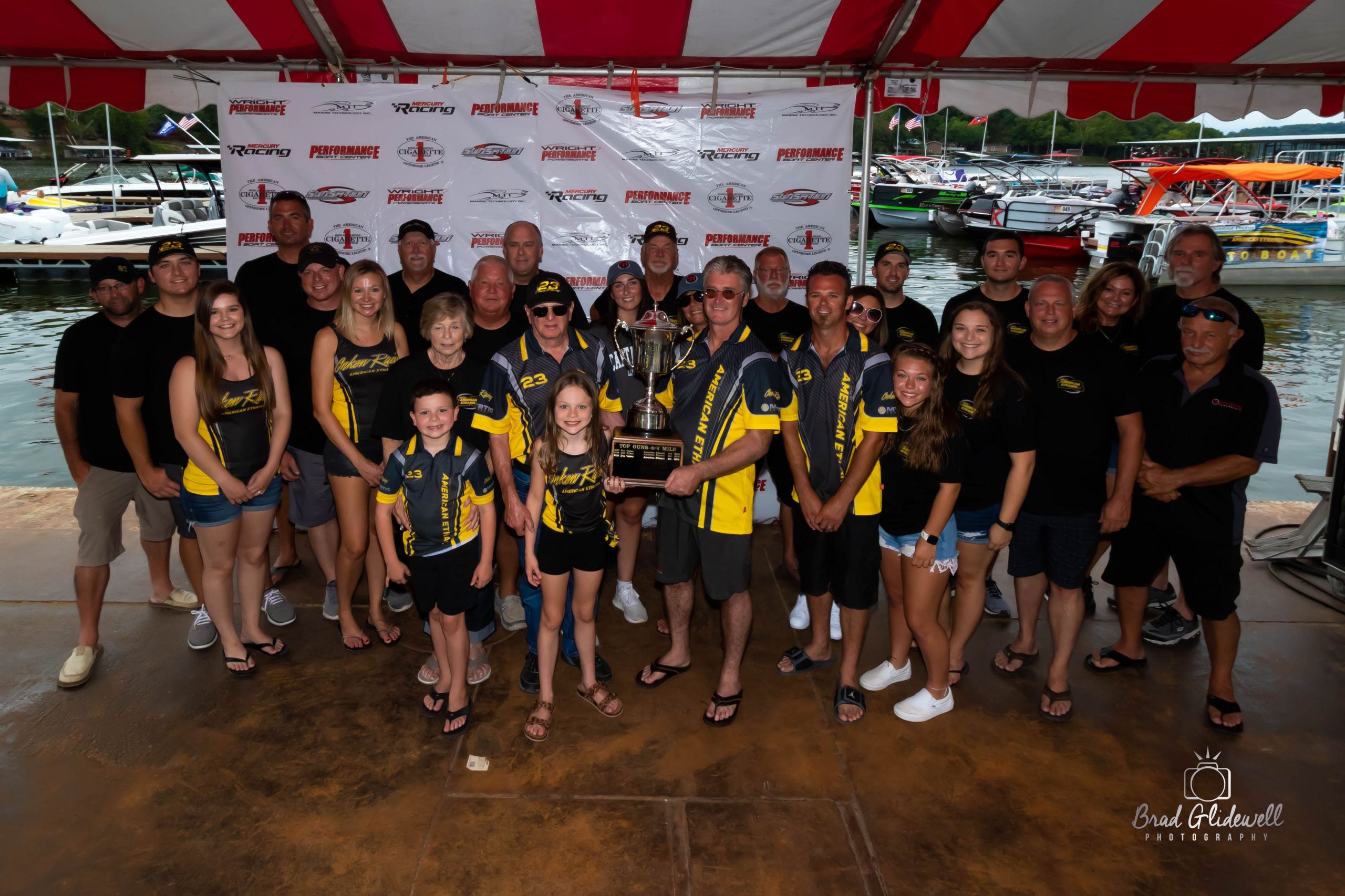 “The boat really just keeps getting better and better every year,” Cosker said. “I think we’re at the point of diminishing returns, where to gain 5 mph is a pretty monumental task with the three-quarter mile course. The boat is a monster on the top end, it picks up so much speed over 180 mph, it’s pulling really hard.

“I think the work to do is really to get it to pull a little bit more on the bottom end, just to get it up and run a little bit quicker but you know the three-quarters of a mile goes by real fast.”

The beauty of the Shootout is whether you have a personal watercraft or a supped-up pontoon boat, participants still have a chance to bring home a trophy. The racers are divided into the professional, manufacturer or non-professional class and the boat type (V-hull or catamaran) along with the length and power determine the class. 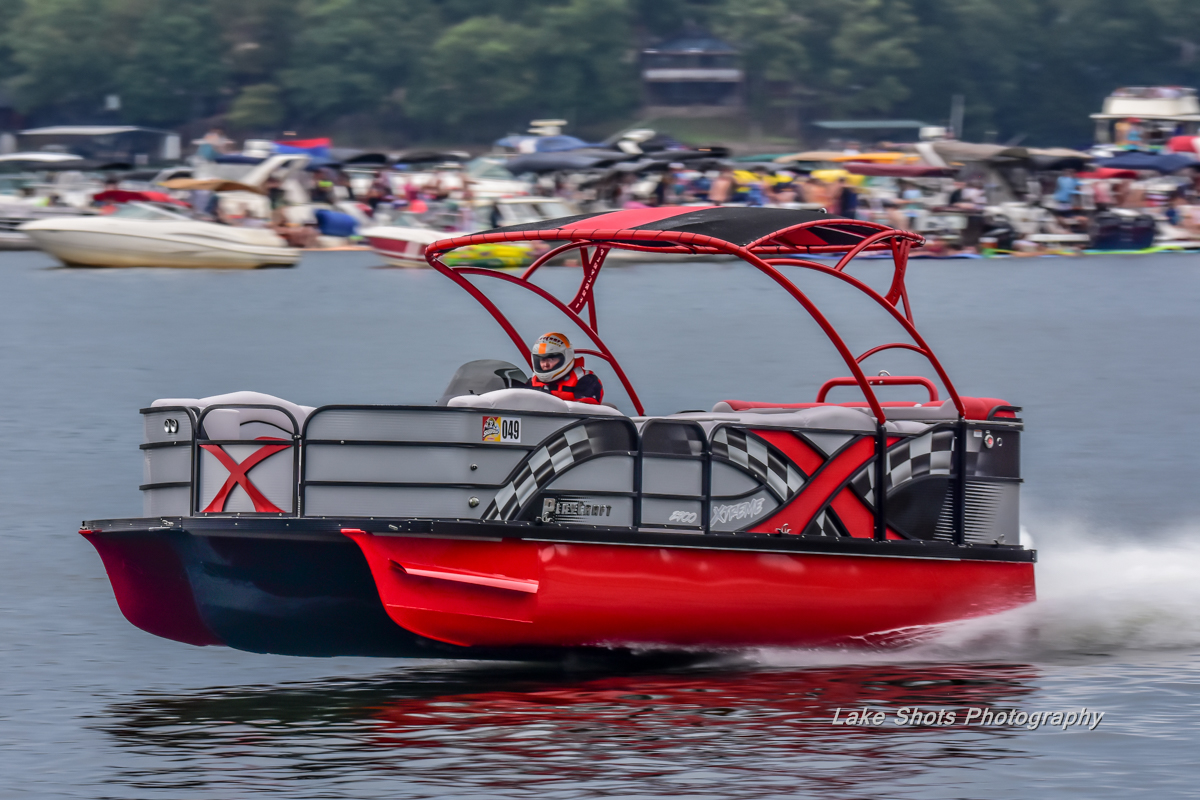 A decade ago, four or five boats might have challenged American Ethanol for the Top Gun crown. Now the field has grown more diverse as boatbuilders use the event to debut new models.

“The big, powerful cats just really aren’t showing up to the Shootout anymore,” Cosker said. “I think the market for those big canopy cats just isn’t there like it used to be. I mean, we went from building big canopy cats to center consoles, so it’s a little bit the way of the world right now.”

Organizers said nearly 100 boats completed 189 runs despite a summer rainstorm that washed out some of the action on Saturday morning. American Ethanol got its 202-mph run in before the storm opened up on the flotilla and another speed run later than day before keeping the boat at the docks on Sunday.

The crowd still saw its share of 100-mph-plus runs during the weekend. One participant hoping to put on a better show was Shannon Hamilton, who brought his 50-foot catamaran from Mystic Powerboats after not participating in the Shootout for several years. 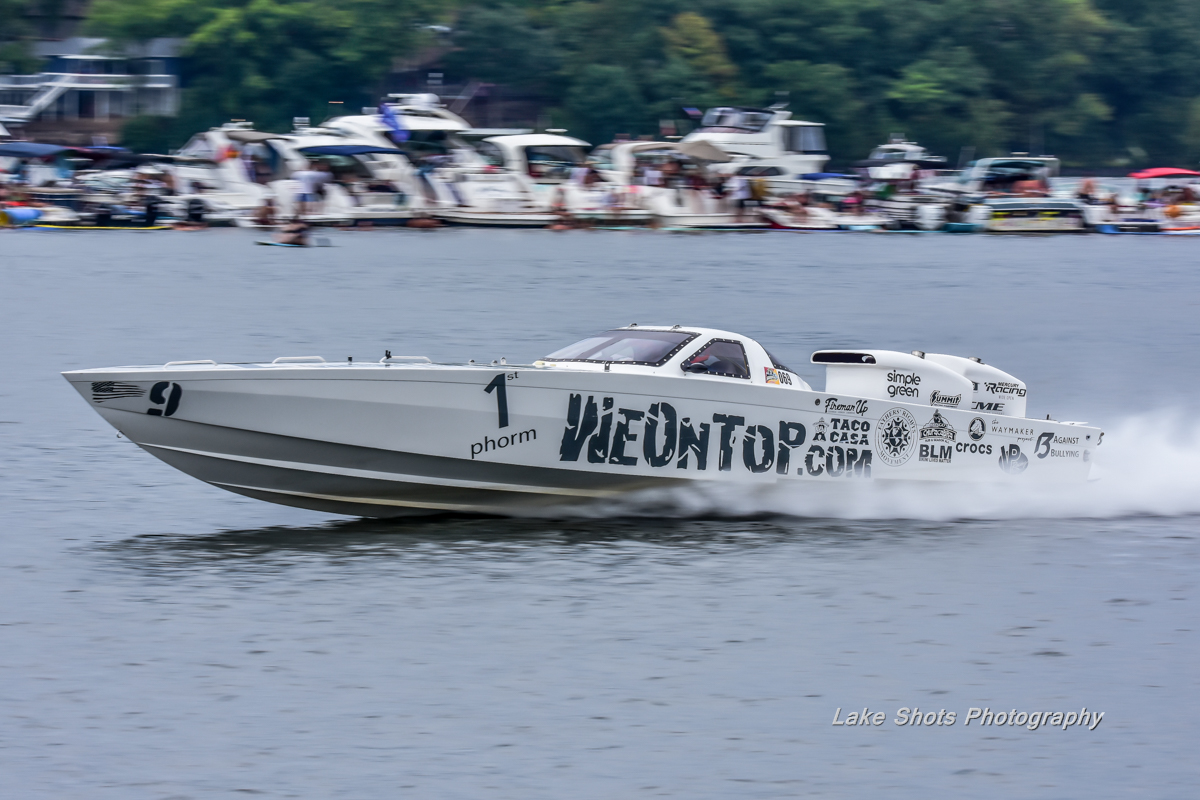 Because of fuel pump issues, the catamaran with T-53 turbine engines had a top pass of 168 mph, far slower than Hamilton and his driver Russell Clay of Clay’s Motorsports had expected. It was still the third fastest run of the Shootout weekend.

There’s more to the Shootout than just watching speed runs as the event has grown into a series of events leading up to the last weekend in August. Poker runs, a Shootout Hall of Fame dinner and induction, and the Super Cat Fest for Kids & Lake of the Ozarks live auction are all designed to bring in more money for local charities.

One of the biggest ancillary events now is the Shootout on the Strip Street Party on the Bagnell Dam Strip. The street party gives locals, who can’t make it to the water, a chance to check out the hardware. It also gives businesses along the strip, which is more than 20 miles from the Shootout course, lots of tourists for a night. 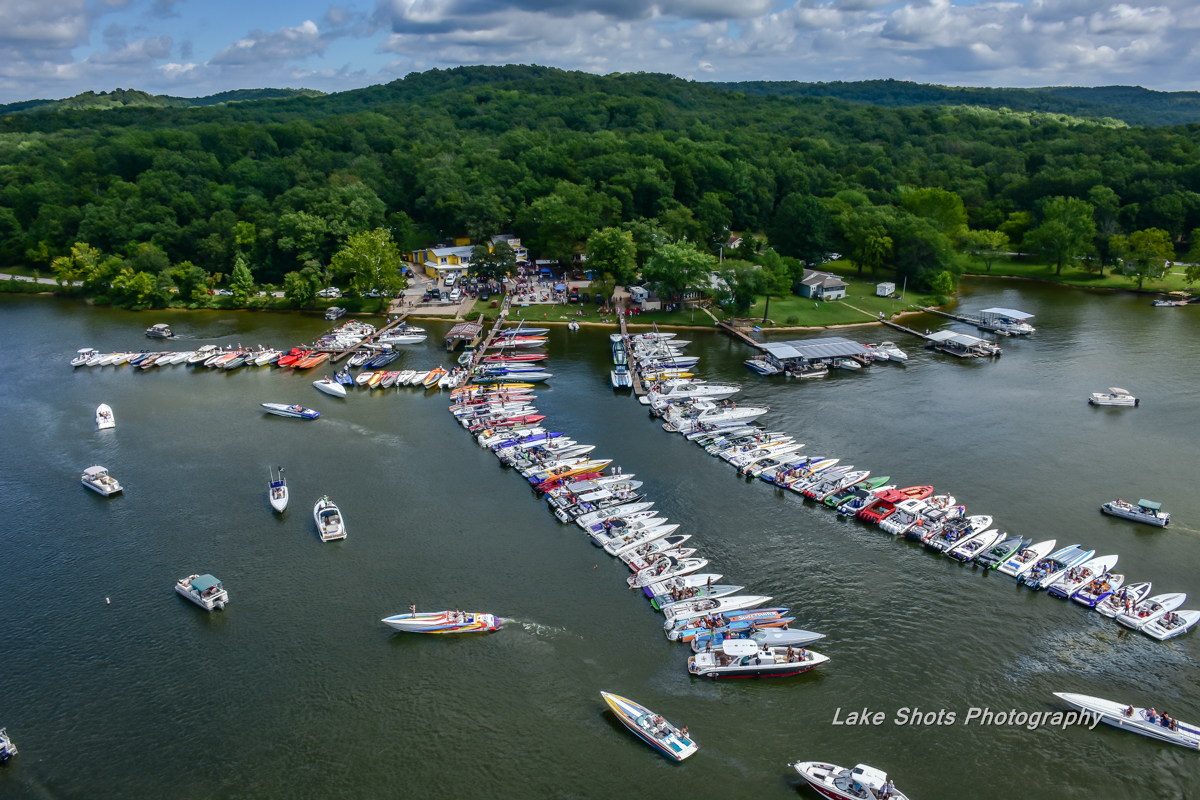 Organizers said the crowds were similar to past years, even in the midst of a pandemic. Duggan isn’t surprised by the turnout as the summer had been one of the busiest in the years Duggan has lived on the lake.

The tourism boom started, Duggan speculates, after the gossip site TMZ ran photos after Memorial Day weekend of packed swimming pools at restaurants and bars on the lake. The shaming of the lake for its laisse fare attitude toward the Covid-19 pandemic actually created a tourism and real estate boom.

“The Lake of the Ozarks is kind of a different world than what a lot of other people are living in right now,” Duggan said. “We’ve taken it seriously, but we’ve not let it control our lives.”

About 500 volunteers helped to run the event, stepping up to work extra hours to make sure the Shootout went smoothly. Duggan had some fun when announcing the money raised during an event in late October. As race director, Duggan unveiled a $200,000 check and then moments later a second check for $200,000. Credit goes to the Super Cat Fest at the Camden on the Lake with an auction that bought in more than $200,000 for charity.

The Shootout has raised more than $2.2 million over the past 13 years, Duggan said.

“The volunteers do it for the love these charities and the good it does in this community,” Duggan said. “That’s what keeps me motivated each and every year. I’m one of those people that I want to do more and more every year, and I want to do better. I’m never satisfied with what I’ve got.

“Next year we’re gonna eclipse that $400,000 mark and shoot for maybe a half-million next year. I’ve always said it was a half-million-dollar event and we’re getting close to it.”