Following all the promotion and anticipation from event organizers, manufacturers and participants, the 2014 Texas Outlaw Challenge – one of the most celebrated power events of the year – surpassed all expectations as the four-day performance-fest delivered non-stop excitement, speed and entertainment.

Following all the promotion and anticipation from event organizers, manufacturers and participants, the 2014 Texas Outlaw Challenge – one of the most celebrated power events of the year – surpassed all expectations as the four-day performance-fest delivered non-stop excitement, speed and entertainment.

“The attendance is a record year for us,” explained Robinson. “The community really backed us and when the local community is behind you it’s a great event for everyone. The weather was great. We had no safety issues and no drama. The whole weekend offered non-stop hospitality from Texas.” 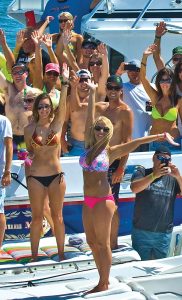 Hosted in the community of Kemah, TX, the event kicked-off in true Texas-style with registration and the new VIP Stampede Party, a fresh concept introduced this year that was hosted in a converted bed n’ breakfast and called Miss Charity’s Saloon. According to Robinson, attendees had to purchase a non-firing, replica six-shooter (with holster) or rifle with proceeds to benefit seven local charities. With entertainment going well into the late evening, Robinson explained all non-firing, replica six shooters and rifles was purchased and was essential in the raising of proceeds. A bike and classic car show was also held during the event, which attracted nearly 100 entrants and was also instrumental in benefitting local charities.

On Friday, the excitement continued – this time on the water with the popular Texas Outlaw Challenges’ 100 Plus MPH Club: Extreme Shootout, which attracted the who’s who of the recreational performance boating crowd. In the end, however, it was Gary Smith and Vern Gilbert who cranked out the top speed hitting 176 mph aboard a Skater SS, Predator, powered by twin 1700 hp Carson Brummett engines tagged to No. 6 drives and Hering props. The team’s speed was another first for the event and went down as the highest speed to date in Texas Outlaw Challenge history. This is the second top claim for Smith who was just honored with the King of the 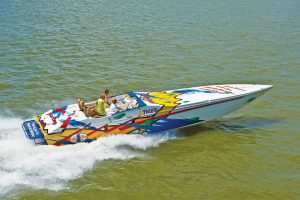 “On Friday we had what we called a High Horsepower dock party,” explained Robinson. “It included a dock full of high performance boats adjacent to a parking lot full of pro-mod race cars. We had a firing up contest where the pro-mod cars fired up and rev their engines and then the boats fired up and revved their engines. It was pretty wild and very loud.”

The action commenced on the water Saturday with the annual Poker Run, which consisted of approximately 90 percent performance boats who came to play the perfect card hand. After playing various cards at the selected card stops throughout the south end of Galveston Bay and Clear Lake, Kenny Armstrong – who also hosted the first card stop at his residence that attracted nearly 120 boats – drew the top hand and winning the event.

With an impressive speed conducted by Gary Smith and Vern Gilbert during the shootout, the raising of proceeds for local charities and a record attendance for the poker run, be sure to expect more from Paul Robinson and the Texas Outlaw Challenge for 2015.