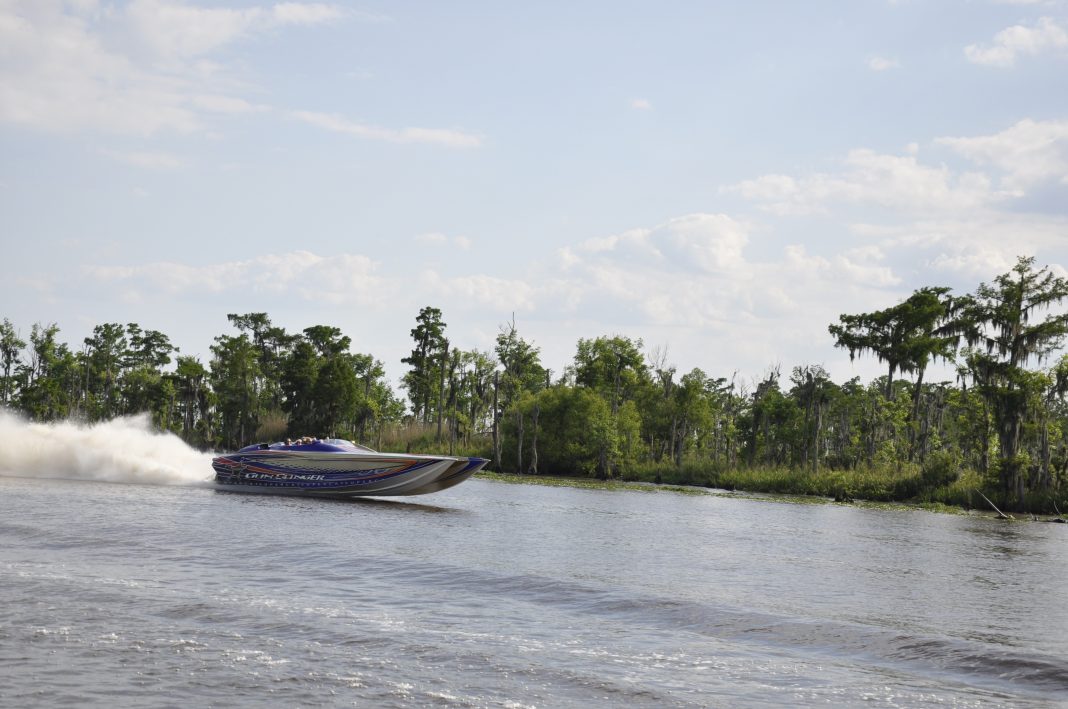 The Tickfaw 200 Poker Run, hosted at Blood River Landing in rural Springfield, LA, at the beginning of May, is a one-of-a-kind event that has become one of the true “go-to” powerboat poker runs where players come from as far away as Michigan, New Jersey, Florida, even California to enjoy everything the event – and the region – has to offer. This year was no exception as the run hosted more than 325 boats – ranging from center consoles and cruisers to a series of offshore boats – and sold a record number of poker run hands.

In its sixth year (since the event was re-established on the boating scene in 2009), the Tickfaw 200 Poker Run takes months of planning and Blood River Landing owner and host of the event, Joey Fontenot, is the first to acknowledge the tremendous effort of making a poker run of this size happen.

For 2015, the weather couldn’t have been more perfect. Bright sunshine and blue skies prevailed as the participants visited the 10 stops along the poker run course, providing the chance to meet, socialize, and enjoy the series of local, shoreside businesses. A special kudos is owed to many of the businesses that were involved in the run including The Canal Bank Club; Blind River Bar; Sun Buns; The Dock; Friends Coastal Restaurant; Hooked Up Bar and Grill; Riverside Bar; Landry’s; Brisbi’s; and the Prop Stop. A special to thanks goes to all the bands at Blood River Landing’s Fun House for providing great music.

While the event attracts an assortment of boat models, it came as no surprise that the series of MTIs, Cigarettes, Baja’s, and Fountain go fast models stood out from the pack. Regardless, with smooth to light chop on the lakes and rivers, all participants could enjoy wide open-lake running, scenic runs along the rivers or even the long-straight-aways in the canals. The choices for the type of cruising met all of the driver’s comfort levels.

Participation for The Tickfaw 200 Poker Run grows year over year. Event organizers are grateful for the commitment of new and returning poker runners, including this year’s winner with the best hand, Rick Day.  Rick has been attending and supporting the event for some 17 years.

We also acknowledge the support of our sponsors and hope that they will continue to support this worthy cause.  The proceeds from the sale of Poker hands are donated to the Livingston Parish Sheriff’s Office Waterway Division.
We would be remiss if we did not say a hearty thank-you to the residents of the local community.  We appreciate their support for this wonderful event.  Since Blood River Landing is a private marina, the public is afforded a rare look at the facility.   A special thank-you is also in order to the Home Owner’s Association of Bruce’s Harbor for again allowing us the use of their canals and vacant lots.

Without their support it would be extremely difficult to park all boats and trailers.
Thanks to the Livingston Parish Sheriff’s Office and the U.S. Coast Guard for their watchful eyes.  We once again had an event with no major problems.  It was my privilege to ride with one of the Sheriff’s patrols and witness the first-class conduct displayed by this hand-picked group of dedicated professionals.

As Joey said to me after the event, “I am exhausted and yet, it was all worth it.  Thanks to the great group of people who helped in the organization and production of this year’s Tickfaw 200.”  Having said that, I could tell that he was looking ahead at next year’s event.