The 2014 Jammin’ on the James Poker Run, held August 2-3 in Richmond, VA, once again proved its popularity among the go-fast crowd as it attracted approximately 77 boats and more than 350 participants who came to enjoy the region and everything the event had to offer.

The 2014 Jammin’ on the James Poker Run, held August 2-3 in Richmond, VA, once again proved its popularity among the go-fast crowd as it attracted approximately 77 boats and more than 350 participants who came to enjoy the region and everything the event had to offer.

Hosted by the Richmond Powerboat Association (RPBA), this year’s event introduced a new hosting facility for the welcome party Friday night – not too mention a few exciting modifications to its popular dock party following Saturday’s poker run – that made the run extra memorable for the players. 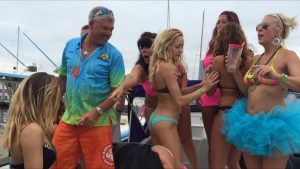 “We were limited this year with the starting point of the run and Jordan Yacht Haven – the hosting marina for Friday – was the only marina at the time that could accommodate us,” said one of the key event organizers James Barton of the RPBA. “It’s a great place with a full service facility, travel lift, Mercury Marine authorized service department, ample docking space, and a swimming pool for the participants.”

What made the run extra special this year, however, was that in addition to raising proceeds for the Shriners Hospitals for Sick Children, proceeds were also raised for a long-time fellow poker runner, Grayson Kirby, who, at the time, recently experienced a life-threatening accident. Funds were raised to help support his family business while he was in the recovery process.

“We raised money for Grayson and his family Friday and Saturday,” said Barton. “The fund was called GWK Strong Fund. As his family owns a farming operation, the proceeds were used to hire additional help to assist in maintaining the business.”
In true Jammin’ on the James style, event organizers announced a “Neon” theme for this year, encouraging everyone to wear something neon – whether it be stunning sunglasses, bikinis, swimsuits, a chain of glow sticks, or anything creative, and neon.

At 12 Noon Friday spirits were already high as players from many points of the compass arrived for the welcome and registration party at Jordan Yacht Haven. Unlike other poker run events, captains were dealt their card hand right at registration and if they wanted to play additional cards, they could be drawn for a fee to benefit the charity aspects of the run.

Once the players were registered, the event kicked into high gear as everyone enjoyed a catered dinner, the facilities of the marina, and entertainment throughout the evening. 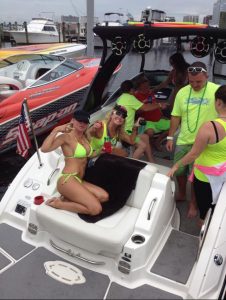 The next morning, the day of the main event, a light breakfast was served and following the mandatory driver’s meeting at 9:30, participants made their way to the slips to prepare for the start of the run at 10:30.

With the 90-mile course set, the participants throttled up and in one swift movement, the armada of power made their way down the James River to a quick stop just before Jamestown, VA. for a chance to let engines cool and allow participants to quickly regroup. It was then a matter of a quick blast down the Pagen River to the lunch stop at the luxurious Smithfield Station.

“One of the things that we did different this year was upgrade the lunch stop,” says Barton. “After the boats rafted up, we served crab cakes, steamed shrimp, barbecued chicken, and various salads.
After almost three hours of cooling off in the resort’s pool and enjoying everything Smithville Station had to offer, the players were off once again to enjoy the 40-minute blast to the final stop at Tide Water Yacht Marine and the eventful dock party.

“We placed more emphasis on the dock party this year,” said Barton. “All along the slips, we arranged for everyone to set up a beverage station offering a range of drinks to enjoy. This really opened up the social atmosphere. We even had prizes for people who set up the most exciting table. Also, rather than having a traditional dinner at the banquet hall, we catered a light dinner consisting of beef, fish and chicken. For poker runners who wanted something different or even a cooler environment, they had access to the on-site 757 Crave lounge.”

With the excitement continuing well into the evening, the docks lit up Neon for the event’s “Glow Party” featuring vivid colors all along the slips. Select poker runners’ boats even added to the atmosphere with dynamic LED underwater lighting. What’s more is event organizers gave away lightweight, neoprene, green neon event shirts to all the participants that further added to the event theme and glow party.

“It was pretty cool and quite an amazing sight to see all the participants walking the slips in bright, green neon shirts on Saturday,” said Barton. “But the run is generally known for its dock party. It was really different this year and everyone had a great time.”
While entertainment went well into the evening, the cards were played and taking first place was Kenny Krout while in second was Kent Krable.

The following day on Sunday, the poker runners leisurely regrouped for the 90-mile run back to Jordon Yacht Haven with many stopping at Chippokes Plantation Sate Park to enjoy the area and recollect memories from the night before. PRA