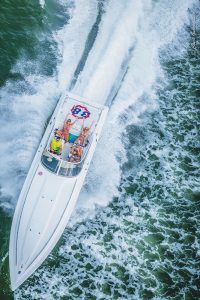 For the eighth straight year, the Mid Atlantic Powerboating Association’s (MAPA) F. Wayne McLeskey Jr. Memorial Powerboating for A Cure Poker Run was a sell-out event. The run has a limit of 75 boats and that number was reached in only two weeks. MAPA estimated that there were more than 285 participants in the run that featured some nearby veterans and some new players.

Dr. Michael Janssen won the Longest Tow Award as he hauled his spectacular 53’ canopied Outerlimits from Colorado. Not to be outdone, Dan Davis brought his own 53’ Outerlimits from Chicago. “We had hot temperatures but absolutely perfect conditions”, said Mark Tuck, a longtime participant in Powerboating for a Cure, who owns a 44-foot Outerlimits V-bottom.

Since the Powerboating for a Cure run began, the group has raised more than $270,000 for Breast Cancer Research and donated more than $40,000 to the Associated General Contractors for their Scholarship Program.

The event started in 2009, and the organizers chose Susan G. Komen as the charity after learning that that 75 percent of the money raised stays in the local area. Additionally, the Sheraton Waterside Hotel has been an enthusiastic partner with MAPA, hosting most of the events. The Waterside Marina also hosts the poker run fleet for the entire three days.

Wayne McLeskey was an avid powerboater who participated in hydroplane racing, performance boating and sport fishing.  His Family Foundation was once again the title sponsor of this year’s event.

The course for this year’s run had a slight change. The boats ran a little more north in the James River up to King’s Mill Resort  in Williamsburg, Va., and a little farther south into the ocean and around to Rudee Inlet for a stop at Rudee’s On the Inlet Restaurant. In between there were stops at Blue Water Yachts in Hampton, Chick’s Oyster Bar, the Back Deck and Long Bay Point Marina in Lynnhaven, Virginia Beach, and Pelican’s Nest Marina in Norfolk, before the poker runners returned to Waterside Marina. The longer of the two courses is approximately 135 miles.  The boaters experienced the calmness of the river, the rolling swells of the bay, and the excitement of the ocean.

While fellow performance power boaters to the north battled rough water conditions at Boyne Thunder in Michigan, MAPA members were met with relatively calm seas, a slight breeze and mid 90 degree temperatures.  “Every part of the weekend was a success”, said Bob Veith, Event Chairman, “It could not have been more perfect”.

On Friday afternoon before the run Mark and Nancy Tuck hosted a fun run. There was a silent auction at the Sheraton that carried over to Saturday. On Friday evening, 16 beautiful contestants strutted their stuff in a bikini contest by the pool. In addition, on Friday night, the participants were treated to an Italian Buffet Dinner provided by Ynot Pizza.

Saturday wrapped up with the poker run awards ceremony followed by a dock party. During these festivities, the teams played their poker hands and the money raised was handed to Susan G. Komen for the Cure and the Associated General Contractors Scholarship Fund. This came after the poker runners were treated to grilled pork chop medallions, smoked grilled sausages and BBQ Shrimp on the barbie, all of which was served to the participants at their boats as they arrived back to the marina. That evening they were also treated to a dinner of pulled BBQ Chicken, beef brisket, and all of the fixins from Mission BBQ.  Later that same evening, the Participants were also entertained by a full Fire Works Display over the Elizabeth River, hosted by Harbor Baseball Park, home of the AAA Tides Baseball.

The Powerboaters also had aerial photos provided by photographers Chuck Guthrie and John Ainslie, both of Virginia Beach, who, from the helicopter, shot almost 2,000 pictures. PRA