Huber, which was based in Baton Rouge, LA., is best known for its high-performance marine transmissions while Halpin spent 15 years as a technician at Mercury Racing. His career there ended in May 2013 and word got back to Halpin that Rick La More, Jr., president of Innovation Marine, wanted to talk to him later that summer. La More had already been in talks with Huber, but wanted to ensure he would have the right person to run the new business before completing the purchase.

“This is a small industry and it didn’t take long for word to leak out,” Halpin explained. “They had watched me work. I have the communication skills and people skills. Once I agreed to come aboard, they continued into negotiations.”

As a factory technical representative for Mercury Racing, Halpin worked closely with Innovation when the engine manufacturer and service facility was the only shop certified by Mercury Racing to seal and inspect the engines for Factory class offshore race boats in the late 1990s and early 2000s. Halpin’s home base was Mercury Racing’s famed Lake X test facility in St. Cloud, FL, where the best of the best got the most out of their propping. 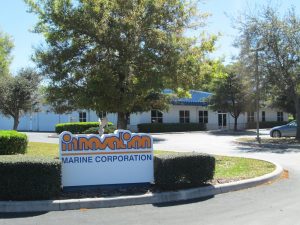 Huber Marine and Machine, which the company is now called, was relocated to Sarasota on the same site as the Innovation headquarters, but Halpin, who is officially called the Manager of the entity and has been in the role since July 2013, said it will run as a completely separate business. Innovation partnered with Huber primarily to ensure it can consistently provide transmissions for its contracts with the U.S. Department of the Navy, and other branches of the military.

Innovation builds high-performance, high-torque gas and diesel engines for various military customers (and has also won several offshore championship races with their engines), including U.S. and foreign and consumer customers, and wanted to make sure it could provide reliable transmissions as part of the package.

The transmission that will be produced at Huber Marine and Machine is called the Huber 1550. It can handle 1,500-foot pounds of torque and has 11 clutch plates. The clutch disc material is upgraded to graphite and the increased number of discs gives the 1550 the ability to handle greater torque loads. Other noteworthy features include a nitride oil pump for reduced wear and better corrosion protection, a nitride input shaft for increased torque capacity and improved wear, a longer hub to accommodate more discs, and a larger piston in the forward clutch cylinder to increase clamping force on the forward clutch disc.

A deep sump stainless steel oil pan on the transmission keeps the oil below the rotating components, resulting in less parasitic loss and more horsepower output at the propeller shaft. An integral windage tray keels oil out of rotating parts during acceleration for more efficient operation.

After spending a week in training at the Huber facility in Baton Rouge, Halpin packed up what he needed and moved it all to Sarasota. Initially, his focus will be on keeping up with the demand from the military contracts, but he said he plans to increase the consumer side as well, rebuilding transmissions for civilian customers. “My personal goal is to increase the consumer side,” he said. “The government side, we know how many transmissions we need to supply. If we do not have any vendor supply problems we can keep up with the government side of things.”

For more information contact Huber Marine and Machine at 941-587-8313, www.hubermarine.com